Nick Rouse has been awarded the 2019 Community Energy Champion Award.

For the past twelve years Nick has volunteered his time and technical expertise to champion local renewable energy generation projects; promote the benefits of energy efficient homes and buildings; and educate others about the need to reduce carbon emissions and play our part in tackling the climate crisis. 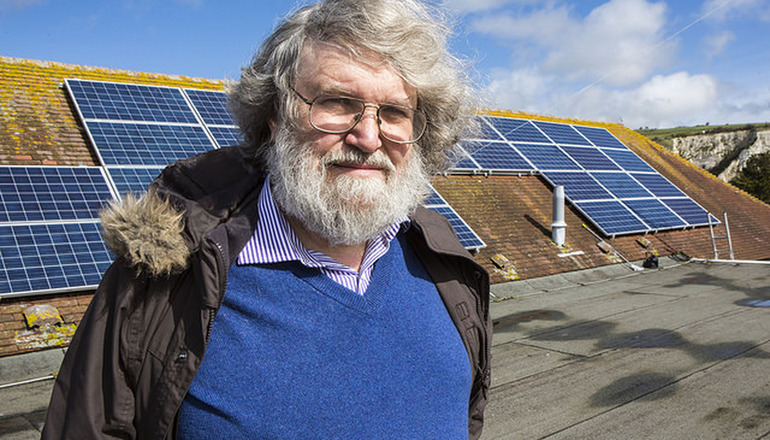 Initially joining the Transition Town Lewes Energy Group, Nick went on to be a key member of the team to set up Ouse Valley Energy Services Company (OVESCO), which opened their office in Lewes, East Sussex, in September 2007.

Prior to retirement Nick had been technical director at Telcon Engineering working on electrical engineering for the renewable energy industry. He wanted to put his skills to good use, and soon established his volunteer role as technical advisor to OVESCO.

Nick regularly volunteers three days a week supporting the OVESCO team, cycling the seven miles to the Lewes office and back in all weathers. In 2017 Nick had a cycling accident and ended up in hospital with a broken pelvis. He had to stay at home for three months to recover, but even this didn’t stop him, he continued volunteering from his bedroom!

Nick has provided technical expertise and advice on a whole host of projects. He has helped develop models that enable OVESCO to calculate the business case for different projects. OVESCO has shared this information with new community energy groups across the country, so they don’t have to reinvent the wheel. Had it not been for Nick’s work, many groups would have been far less informed about how to make a business case for their projects.

Nick’s volunteering isn’t limited to ‘desk-based’ technical work. He has dedicated thousands of hours, and an endless supply of enthusiasm, to helping and educating people about the changes they can make to their lives and homes to become more energy efficient.

Nick used his own Sussex cottage as a demonstration project for the ECO Open Houses scheme, fitting it out with one of the first solar PV systems in Sussex, a ground source heat pump, solar thermal, external wall insulation and triple glazed windows. His cottage is now registered as a Super Home. More recently Nick put in a charging point and battery storage and brings his car to the annual Electric Car Day in Lewes. 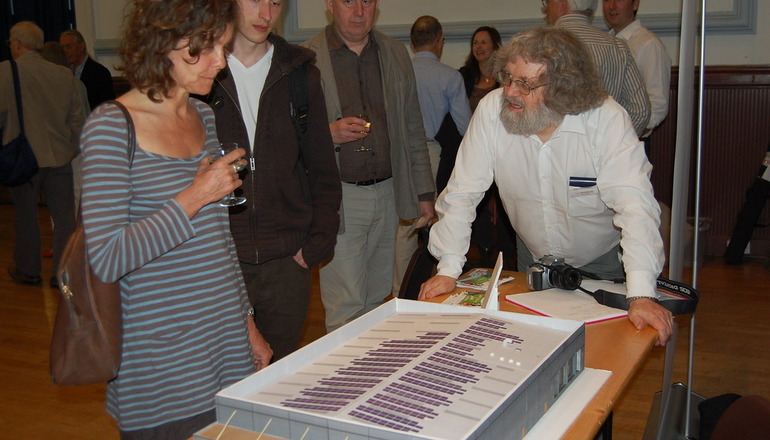 He built a scale model of the Harvey Brewery in Lewes to help people understand the share offer to install 98kW of solar PV, he monitors 11 roof top solar sites as part of OVESCO’s Sunny Solar Schools scheme, and surveys local homes and businesses, giving advice on how to reduce energy bills. Nick has played a key part in OVESCO’s educational work. He built an energy bike that powers lights to demonstrate electricity generation. Nick, and his energy bike, attends numerous events every year, including the SE Big Bang for STEM, when over 200 school pupils powered the bike. He has built a range of renewable energy models that show children how clean, green electricity can be generated. The models, combined with Nick’s ability to talk to his young audiences, are an excellent teaching tool for children who appreciate learning through practical experience.

As a volunteer director for Meadow Blue Community Energy Nick helped raise over £1.2 million of investment in a 5MW community owned solar farm at Merston and saw the solar farm built and refinanced. He also sits on the boards of numerous other projects.

Nick is a true champion of community energy; he freely shares his knowledge and time and never seeks praise or reward. In the early days of OVESCO, members of the public would write to the local Lewes press to say wind turbines and solar PV do not work and need taxpayer’s money to fund them. Nick regularly defended local renewable energy projects, in the press and at local events. He would speak out in favour of the Glyndebourne wind turbine, OVESCO’s first solar PV projects and Rampion wind farm. He defended renewable energy saying it does work and it will get cheaper to deploy; and Nick has been proved right.