To celebrate the pioneering Ashton Hayes Going Carbon Neutral project turning 15 years in January, Garry Charnock has penned a detailed account of how they got started on their journey to zero carbon. He writes:

The potential dangers of climate change had been on my mind ever since my wife Anne had persuaded me to go to a talk at the Hay Literature Festival in May 2005. It was there that Sir David King, the Government’s Chief Scientist and Lord Oxburgh of Shell explained their views on global warming and then ended their talk by challenging the 1500-strong audience with this question, “what can you do about climate change – time is running short”.

This question troubled me. What could an individual do about such a big problem? I mused on this for a while and during an autumn stroll I had a thought. Could I could persuade my friends and neighbours in Ashton Hayes to act together to mitigate the effects of climate change? Maybe we could set an example by becoming a carbon neutral community?

With lots of ideas buzzing in my head I returned to Ashton Hayes and developed a plan of action. I first phoned the energy advice centre at Energy Projects Plus in nearby Northwich and spoke to specialist Eric Whitworth. I asked Eric if he could put me in touch with any community that was trying to become carbon neutral. “I don’t know of any in the UK,” said Eric, “but we’ll definitely support you if you wish to have a go in Ashton Hayes.”

This short phone conversation kindled the journalist inside me. Could we try to become England’s First Carbon Neutral Community? I immediately realized the publicity potential of adopting such an aspiration in Ashton Hayes. But would the residents back such an ambitious idea?

I decided to venture down to the pub quiz one night in late September and to have a chat with my best mates over a pint of Weetwoods Ale.

I’d already decided to first approach Alex (Professor Roy Alexander) with my idea.“Do you think we could try to become England’s first carbon neutral community?” I asked. I could see that others in our pub quiz team were earwigging and waiting for his reply. I think Alex was a bit surprised that I’d even thought about climate change. “I don’t see why not, it might work. I’ll get the University of Chester to support it. It would make a good project for my geography students!”

The response by this bunch of pub quiz intellectuals spurred me on. I had thought they might suggest I was committed to the asylum but instead they wanted to know the next steps. We discussed various ideas and they kindly offered to come to any public meeting and demonstrate their support for the idea.

I felt strongly that the key to success would depend on the backing of our local Parish Council which is the democratic body representing the residents of Ashton Hayes. So, I used my citizen’s rights and asked if I could give a short talk and make a proposal to the council at its November 2005 meeting. The talk was entitled Ashton Hayes – Britain’s first carbon neutral village? Here is an excerpt:-

…“I propose that Ashton Hayes tries to become the UK’s first ‘carbon neutral’ village – a place in which we can be proud to live and say that we are no longer contributing to climate change. If we can do this, our grandchildren will respect the fact that we tried to do something about the situation.

I have made substantial investigations about this and found that some small groups have teamed up to discuss environmental actions and there have been new build projects, but that no English village has yet formally declared that it aims to become ‘carbon neutral’. Tonight, Ashton Hayes could take up that challenge.

So how do we go about this in practice? First of all, we need to work out our current emissions as a community, and then determine which emission reducing activities we can take to get us to the point where we can declare ourselves to be carbon neutral. That is, we do not increase the amount of CO2 in that atmosphere.

The University of Chester is very keen to help us do this. The head of the Geography & Sustainable Development Department has told me that he will organise students to carry out the assessment surveys and computations. This will help them with studies for their master’s degree in sustainable development that is starting in 2006 and for work-based learning for undergraduates.

I will also commit to the project if the Parish Council will adopt it. I am happy to do the research and produce information to help people understand what this is all about and pave the way for the baseline survey next Easter. The idea is not to publish details about individual houses, but to report how we are succeeding as a community.

I will also produce information material at regular stages to give residents guidance on actions that they might consider taking. At first we shall suggest the ‘quick wins’ that will make a major impact. As time goes on, we might consider taking village-wide activities, such as encouraging the use of solar panels and even small wind turbines.

Most of the things we could do, do not involve cost or much effort. For example, everyone in the village could be encouraged to change their electricity supply to green energy. This takes a few minutes, involves a phone call or letter to your current supplier, who will switch you over for no cost and no increase in your tariff. However, 8 out of 10 of people are not aware of this. There are even some suppliers such as npower offering discounts for those who opt to be supplied with green energy. This simple action would cut Ashton’s greenhouse gas emissions by about a quarter.”

The Parish Councillors listed attentively and then agreed to debate my proposal ‘Ashton Hayes, aiming to become England’s first carbon neutral village’. I was asked to leave the room while they voted. My village friends, Eric Whitworth and Professor Cynthia Burek of The University of Chester remained in the audience to show support.

On my return I was delighted that they had voted in favour of the idea. I had presumed this was a unanimous decision but discovered that it was just 3:2 in favour. A close call! However, the Council also imposed three conditions of acceptance.

First, I had to take up the vacant seat on the Parish Council. I felt that this objective might have been the fundamental reason why they voted to accept the idea in the first place! It also sent a ripple of laughter around the room.

Second, I had to organise a public ‘launch’ meeting in January 2006 to prove that residents would support the proposal. I felt this was a good idea as the Parish Council audience was small and I would like to see the reaction of many more residents.

Third was that I lived up to my promise that the new ‘Going Carbon Neutral project’ would never spend a penny of the Parish Precept – the cash received each year from residents to help manage Parish Council activities and finance village projects.

I quickly agreed to all three requests but wondered how on earth I was going to get residents to come to a meeting on a cold January night –just over a month away.

Getting a community to take action to mitigate something as abstract as climate change was going to be a challenge and I looked around for helpful ideas. I considered the Transition Towns philosophy but felt that I could not persuade the residents to embrace the ‘peak oil’ concept. Ashton Hayes is situated in the hinterland of the Mersey oil and petrochemical industries where many residents are employed. They couldn’t see the world’s oil and gas reserves running low any time soon.

Both Alex and I discussed strategies and agreed that communication, professional measurement and inclusiveness would be the long-term ingredients of success. But in the short term we needed some cash!

Even if Government grants were available for community action, we knew they were not an option, as it would take too long for the monies to materialize. We needed immediate finance to pay for the rapidly approaching January meeting and the associated publicity.

I decided to adopt a pragmatic approach and picked up the phone and called everyone I knew in Ashton Hayes who owned a business and asked him or her for donations in return for ‘sponsoring’ the project. To my surprise I got a warm response and within 48 hours I had cheques totalling £3600. The underlying reason for such generosity seemed to be two-fold. The business leaders were keen to support local communities in which they lived, and their colleagues were also expressing concerns about the impact of climate change. I was also delighted to hear that they wanted to offer more than cash. They were prepared to give staff time at the launch meeting, make display materials and allow us to use their print facilities for free.

The primary school was also enthusiastic and head Rob Ford offered us his new hall and classrooms for free. The primary school children were probably the key to motivating the community. They willingly took home notices about the launch meeting and information on the project aims and started mapping the trees around their houses as the first step in understand the ‘carbon sink’ value of local vegetation.

As a journalist I felt that our ambition to be ‘England’s first carbon neutral community’ would attract the attention of the media, which in turn might persuade Chester City and Cheshire County Councils to be more pro-active with their support. National publicity would also reward some of our sponsor companies with a bit of good PR.

Journalists always want three things: A topical story; good quotes and a few photos. They also want to work to their deadlines, not yours. In preparation for our ‘media campaign’ we used some of the cash donations to pay for new signage at the main entrances to the village. These made it clear that we were aiming to become a carbon neutral village and carried our new logo, made by local resident Steve Holland, and our self-managed website address www.goingcarbonneutral.co.uk. 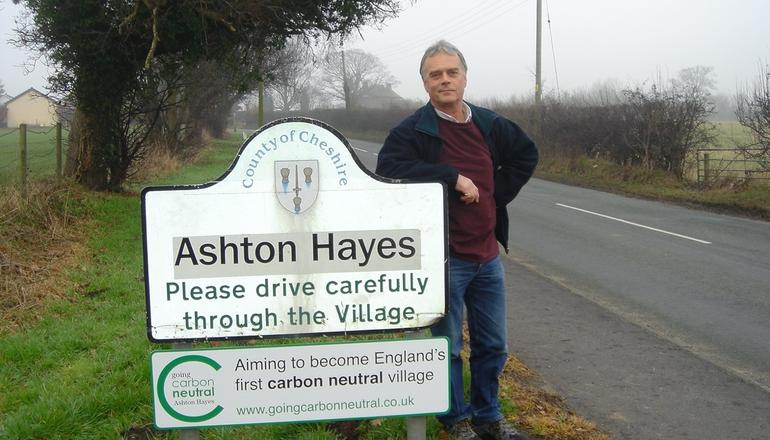 Professor Roy Alexander (Alex) proudly displays the new ‘Going Carbon Neutral’ road signs that were installed on misty day in January 2006. Cheshire Highways later asked if we had asked permission to do this. By then TV stations had broadcast the images nationwide.

We knew the signs would alert passing motorists to the strange happenings in the village but they also would offer a great photo opportunity for journalists as it combined an image with a clear message.

I also arranged to meet the editor of the Chester Chronicle newspaper over lunch and he agreed to run a story about the project and launch. This would give us countywide visibility. In addition, I knew from experience that national newspapers scour the ‘locals’ for interesting news angles and that the idea of ‘England’s first carbon neutral community’ might be irresistible.

As the January 2006 launch day approached things began to hot up in the village. Both Granada TV and BBC NW Tonight arrived with impressive satellite trucks to interview us all about ‘Going Carbon Neutral’. They all filmed the road signs and loved the children’s displays of vehicles of the future. The school featured in all the reports and children reminded their families to watch the news on the days before the launch.