CEE has joined forced with Tesco, Morrisons, M&S and the three biggest food co-operatives in the UK – the Co-op Group, Central Co-op and Midcounties Co-operative to call on the Government to “green the energy grid” by powering investment in renewable energy.

Community Energy England, representing 300 community energy organisations, and the leaders of six major supermarkets, have signed a letter urging Prime Minister Rishi Sunak to prioritise support for community energy organisations to develop projects which involve the wider public in the net zero transition, and offer incentives to encourage investment in renewable energy. The letter also calls for an overhaul of the planning regime to fast-track new wind and solar schemes and create fairer pricing for green energy for households and industry.

The Government has committed to decarbonising electricity generation by 2035 to support the wider net zero goal. To achieve this, the Climate Change Committee has suggested that renewables will need to make up over 70% of generation.

The letter, featured exclusively in the Times (see below), states the need for Government to work with businesses to unlock additional renewable energy generation capacity, including directly funding wind or solar energy farms.

Shirine Khoury-Haq, Chief Executive, Co-op, said: “The energy market is at a crisis point and we need urgent Government action to deliver energy security, drive economic growth and move us closer to net zero. The UK is still too reliant on fossil fuels and we need to create more UK renewable energy to green the energy grid.

“The Co-op is directly sourcing energy from a solar farm and will have even more of its energy coming from such sources in the future as part of a multi-million pound programme to increase the proportion of directly funded renewable energy we use.

“Grid decarbonisation isn’t going fast enough and the Government needs to incentivise investment in it and push through planning reforms to allow rapid progress for onshore and offshore developments.”

Ken Murphy, Tesco CEO said: “This is a critical time to take action on climate change. The food industry depends on the health of the natural environment and we must work collectively to drive the transformational changes needed to meet the UK’s climate commitments. At Tesco, we’re focused on reducing our energy demand and switching our supply to renewable sources. We already use 100% renewable electricity across our own operations, from green certificates, Power Purchase Agreements and on-site generation. However, we must incentivise more investment in renewable energy if we are to decarbonise the grid and transition to a low carbon economy.”

David Potts, Chief Executive, Morrisons, said: “Harnessing natural energy from the sun is a significant way for us to reduce carbon emissions quickly. We have been utilising our own roofs over the last couple of years to help power our stores and sites, which forms part of our commitment to reach net zero in our own emissions by 2035. However, we are reliant on grid decarbonisation to move at greater pace and a policy framework that unlocks investment in green energy."

Stuart Machin, Chief Executive Officer, M&S, said: “The UK has the potential to really lead the way in renewable generation – not doing so would be a missed opportunity. The climate crisis demands urgent action and we want to see the Government responding with the same urgency to remove the barriers across planning, investment and pricing.

“We know we have a role to play at M&S. Our UK and ROI stores use 100% renewable electricity, we have the UK’s largest single roof-mounted solar panel array at our distribution centre in the East Midlands and we are working with our food suppliers to make the switch to renewable energy. These steps are crucial for us to reach our target to become a net zero business by 2040. We’re determined to get there and as businesses, we want to see that same level of commitment from the Government to decarbonising electricity generation – and ultimately its own net zero target.”

Phil Ponsonby, Group Chief Executive, Midcounties Co-operative, said: “Midcounties Co-operative have been long-standing advocates of greening the grid and have worked with, and alongside, our members over many years to encourage and facilitate locally owned community owned energy in particular. We already have agreements in place with over 200 community energy providers, supplying enough energy for 60,000 homes through our Co-op Community Power tariff, and join this campaign on behalf of our members to call for changes to further support renewable energy in the UK. “

Debbie Robinson, Chief Executive, Central Co-op, said: “At Central Co-op our purpose is to create a sustainable Society for all. We’ve reduced our carbon emissions by 80% since 2011, been zero to landfill since 2012 and been awarded the Carbon Trust Triple standard four times in a row. We are committed to generating green energy across our family of businesses installing photo voltaic in 50 of our stores. It's our long term vision to generate energy to be self-sufficient and potentially deliver a surplus for our communities. We're supporting this campaign to call upon Government for a framework to support investment which will enable more support for renewable energy in our communities.”

“The sector doubled in size every year between 2014 and 2017 when there was, albeit reducing, government support. Recently local climate action, indispensable to achieving net zero, has been thwarted, not supported, by government policy.

“This must change if we are to succeed in tackling climate change and building energy security for all.” 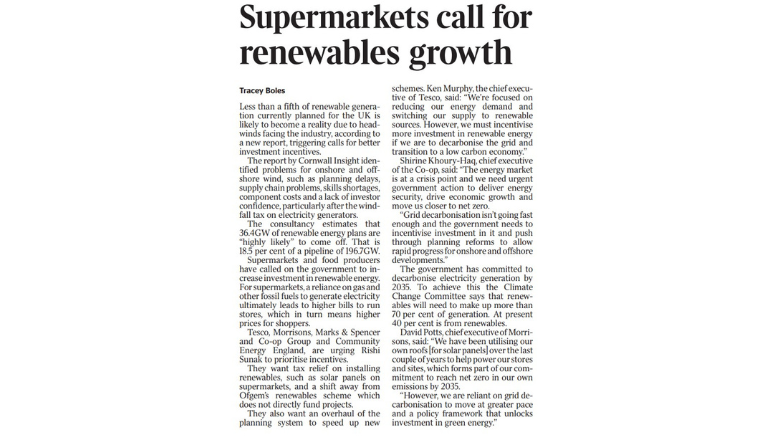