On Tuesday 20 October we wrote to the Secretary of State, Jacob Rees-Mogg urging an exemption for community energy organisations from the Revenue Limit in the Energy Prices Bill.

We are encouraged by Minister Stuart's statement of positive intent in response to Alan Whitehead and we are pleased the Minister has confirmed there are plans to include exemptions to the revenue cap, in response to questions regarding community owned renewables. We hope we can work with Ministers and the team at BEIS to define these exemptions for community energy in the secondary legislation.

We strongly agree with the Government that we need to create a fairer energy system for alland we also agree that the Government needs to act to help all those across Britain who are vulnerable to the steep rises in energy prices. However, we must be careful that any schemeto protect consumers does not inadvertently and unnecessarily hurt local communities, particularly communities in disadvantaged areas that are trying to better their circumstances by developing and investing in community-owned energy.

It is important that any new regulations created or implemented under section 16 of the Energy Prices Bill include exemptions for community owned wind farms, solar farms and hydro schemes that reinvest 100% of their profits back into local communities through projects that help the most vulnerable and strengthen and develop these communities in myriad ways, including vital programs targeted at reducing fuel poverty.

The Environmental Audit Committee’s report of 29 April 2021 recognises the wider benefits from community energy and calls on the Government to remove regulatory barriers and improve support to community energy projects. It would be counter-productive for Governmentin Whitehall to take money away from these communities, even when they are presumably trying to use it for essentially the same purpose of promoting social benefit and 'levelling-up'.

As representatives of the community energy sector in England, Wales and Scotland, we have requested an urgent meeting with Ministers to discuss how the creation and implementation of regulations under the Energy Prices Act can achieve its goals in a way that does not reduce the ability of the community energy sector to deliver its services on the ground -which, in the midst of an energy crisis, are needed more urgently than ever. 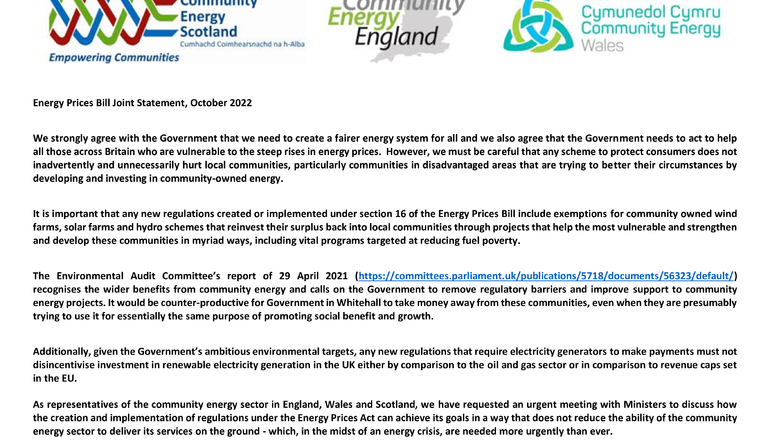