Energy can seem like a taken-for-granted resource, largely invisible itself in everyday use, and sometimes becoming an issue when a bill arrives or credit starts to run out. Within an almost universal need for energy, the way people approach  energy provisioning can tell us their Fuel Story. From times of abundance to times of scarcity, recounting past, present and imagining future Fuel Stories can be a starting point for community engagement—both with the energy resources around communities, and those communities' collective potential to access these. With this is mind, Fuel Stories was conceived as a community engagement and consultation tool, and a research method in the participatory action research tradition. I am delighted to be writing this blog during community energy fortnight, as a way to discuss and share the Fuel Stories resources for the first time.

Fuel Stories: Visualising energy
Community Energy is a form of energy decentralisation, which is set to augment future energy supplies, but it is a model which research shows is more readily adopted by affluent communities and is not particularly widely adopted in the UK. Fuel Stories therefore sought from the outset to  involve, particularly, marginal or disadvantaged groups with the possibility of community-owned energy sources. As a visual project, Fuel Stories used illustration to be both participatory and to elicit ingrained or culturally-held practices around energy use. With my background in anthropology and qualitative research, I had intended Fuel Stories to take a socio-historical approach to energy access, to combine visual elicitation techniques with the principles of ethnographic research to reveal deeper-held attitudes that have a material impact on research participants' abilities or incentives for participation in community energy projects.

Fuel stories in action
Under the sponsorship of the Bristol Sustainable Energy Research Fund and supported by Swansea University, I held  four engagement workshops to provide a comparative set of data about energy attitudes in low-income areas in the South West and South Wales, concentrated in Urban Bristol and the post-industrial Amman Valley. The event format consisted of a “focus group” workshop with visual facilitation, though only two of the four workshops stuck to the traditional focus group format, two could rather be classified as pop-up events with research participants wandering past.  In one case I used thematic cards to prompt discussion, and in later workshops “broke the ice” by showing the visual product of earlier workshops. Workshops and pop-ups fused narrative research and focus group techniques with live analysis and graphic recording on the spot, to create both a visual record of a given community’s Fuel Stories, and a tool for deeper elicitation.  During the discussion process an illustrator graphically recorded the discussion, and the images which were produced act as a further catalyst for discussion.

Fuel Stories Resource Packs
As a result of a thematic analysis of this series of workshops and the resulting images, the Fuel Stories resource pack comprises a set of sixteen cards with captions that provide a set of prompts with which to structure a community or public engagement or consultation on the theme of energy. By using the Fuel Stories resources, facilitators may both gather energy ethnographic data, but also understand much more about the appetite for community energy and relevant constraints in under-represented areas. As such, apart from the theme “energy”, Fuel Stories employed a very open-ended research process in order to capture- as far as possible- community voice.

Community Voice
Fuel Stories is a model that can be adapted to a range of contexts to facilitate the development of locally-owned energy infrastructure. Unlike remote locations, cities themselves do not lack basic energy infrastructure, but individuals may be unable to access particular configurations of resources, such as energy from renewable sources, or community-owned energy. The reasons behind this need to be investigated. Disadvantaged groups have a stake in their energy futures, but do they have a voice? Do existing narratives around Fuel Poverty enable marginalised voices to imagine a more equitable energy future? While I hope that the future of Fuel Stories will be to facilitate community-owned renewable projects starting up in unlikely places, its primary success will be in engaging people and bringing groups together who may not ordinarily participate in public decision-making

The different images generated in the Fuel Stories workshops demonstrated the importance of striving to capture  community voice when it comes to the energy sector, and the push by third parties to be part of the community energyscape. Fuel Stories has shown how there are infrastructural inequalities between different contexts even within the UK, and the data goes some way towards showing how such inequalities have shaped the UK energy mix, particularly from the energy user's standpoint and their concern with everyday energy provisioning rather than, perhaps, grand future plans.

If you would like to know more about the Fuel Stories Project, or to receive your downloadable resource pack, and guidance on ways to use it, particularly ideas for online facilitation, please visit https://www.bserf.org.uk/funded-projects or contact fuelstories@swansea.ac.uk for details. 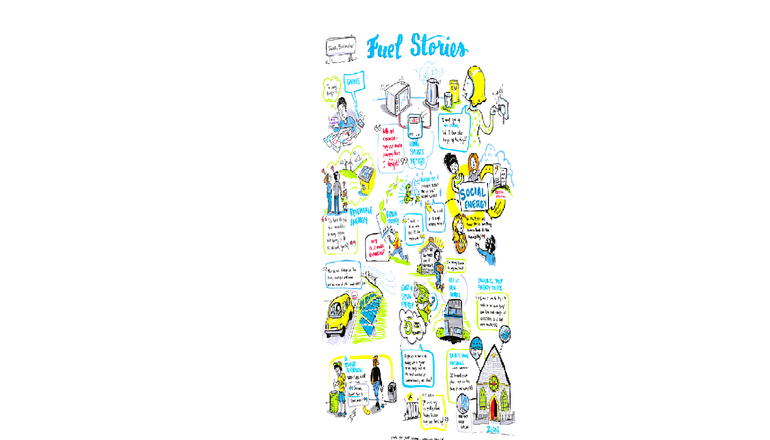 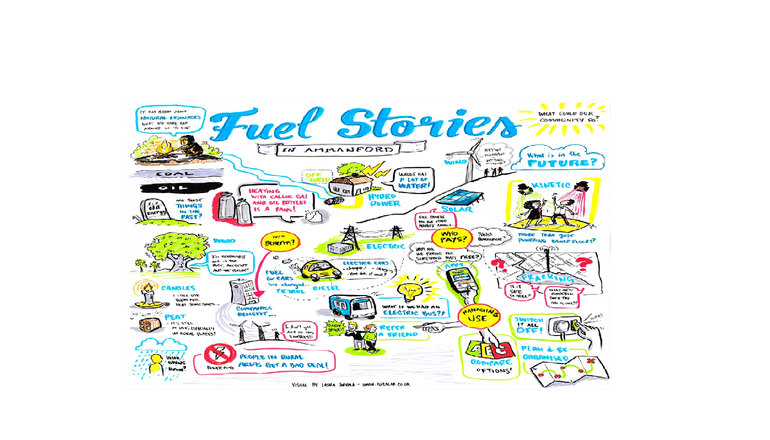