Led by High Winds Community Energy Society, a collective of three community energy cooperatives – Baywind, High Winds and Energy Prospects - have successfully paid off the Thrive Renewables  Community Energy Funding Bridge (CEFB) loan at Mean Moor wind farm, marking the completion of their journey to enable local people to invest in and own a wind farm.

In July 2017, Mean Moor became the first commercial scale wind farm in the country to transfer from a commercial developer to 100% community ownership with the help of our award-winning Community Energy Funding Bridge (CEFB), facilitated by Energy4All. Mean Moor wind farm is situated across the valley from High Winds wind farm on Harlock Hill, the very first community owned wind farm established in 1996. When Mean Moor was being constructed, the community energy group were interested in getting involved, but unfortunately without access to the necessary cash they were unable to buy the site.

At the start of 2017, High Winds approached Thrive. We had previously worked with Baywind Community Energy, which co-owned one of the turbines at our Haverigg wind farm from 1998 to 2020. Our innovative CEFB was developed to enable the groups to take ownership of this much larger wind farm in partnership with Thrive. Energy Prospects and Baywind were brought in, leading to the collaboration between the three energy coops facilitated by Energy4All, a social enterprise created to expand community ownership of renewable energy in the UK.

Annette Heslop MBE, E4A’s Finance Director, said “It is a tremendous achievement for Mean Moor Wind Farm to now be wholly-owned by High Winds. The directors of all three co-operatives and Energy4All have worked incredibly hard, latterly through the challenging period of lockdown, to bring about this success. Without Thrive’s commitment to the project and the availability of the CEFB, the community co-ops would not have had this opportunity.”

The CEFB enables a community energy group to purchase a renewable energy project in partnership with Thrive, which then pays us back over an agreed timeframe, giving the group time to raise their own funds through crowdfunding or bank loans. Thrive can act quickly and efficiently to help communities get the most out of their purchase as well as being able to structure the finance to respond to the needs of the community and the specifics of the project. 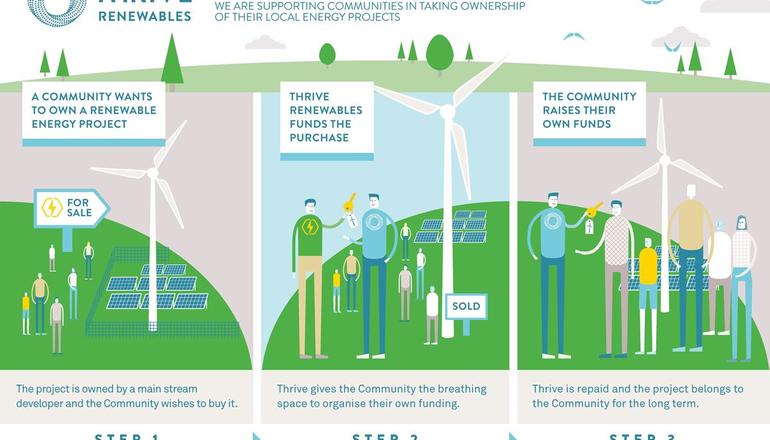 In July 2017 the three cooperatives took control of Mean Moor wind farm and were able to pay back £4 million of the £7.4m bridge loan, through a community loan note issue very quickly in 2017. Over the last three years the community groups have been fundraising to pay off the remaining loan. They have used a combination of sources of funding including the profits from the operational wind farm and undertaking a series of bond and share raises, supported by the experts at Energy4All.

In May 2020, High Winds, Baywind and Energy Prospects successfully paid off the remaining bridge loan, completing the CEFB process and bringing Thrive’s involvement in the project to an end. High Winds also bought out Baywind and Energy Prospects, taking sole ownership of Mean Moor to make both wind farms work even more effectively for the benefit of members and the community.

We are delighted with the success of the energy cooperatives involved with Mean Moor wind farm. It proves the viability of this funding framework and the ability of community energy groups to operate effectively in the commercial sector. The CEFB is available to community groups, local authorities and other groups of interest and we are actively working with partners to develop the next project.  Thrive’s mission is twofold, to grow the UKs renewable energy generation capacity and to widen its ownership, empowering individuals to directly contribute to the transition to a cleaner smarter energy system.  We have been providing flexible funding and expertise to community and commercial energy projects for over 25 years.