What is the IPCC?

The Intergovernmental Panel on Climate Change is a transnational organisation and a subsidiary of the UN. 195 countries are members - this means that they have signed up to the IPCC and have signed off on its findings. It is beyond national governments’ influence, but national governments are not beyond its ramifications. This report (Assessment Report 6, Working Group 1) is the first of its kind since 2014, and focuses solely on “Physical Science”. Issues such as the effects of climate change and ways to overcome it, are included in a series of reports to be released over the next year. The report is the conclusion of years of research, and draws together findings from 14,000 papers, and incorporates 78,000 comments from reviewers and governments.

What’s in the report?

The report issues stark and certain warnings that buck the trend of scientific caution. Its authors say with confidence that "it is unequivocal that human influence has warmed the atmosphere, oceans and land". Since 1970, global surface temperatures have risen faster than in any other 50-year period over the past 2,000 years. This warming is "already affecting many weather and climate extremes in every region across the globe". Looking at extreme weather events that seem increasingly prevalent, such as flash flooding in Germany and China, and fires in Greece, Australia and the USA, the report is clear that "their attribution to human influence has strengthened" over the past decade. It provides a vital reframing of the climate crisis, it is not ‘looming’ or ‘on the horizon’ - we are living in it.

Whilst this makes for difficult reading, many of us will be relieved to see this confirmed in a report of international stature that cannot be so easily ignored by our governments.

One of the main areas of interest going into COP26 is how this report relates to the Paris Agreement - particularly to the ambition to restrict global temperature rises to 1.5 degrees above pre-industrial levels. The first takeaway is that we are not on track to reach this goal by reducing emissions at current rates. The second is that there is still a pathway to avoid this in the long-run, but that it is only feasible in the best-case scenario. This puts in stark light the urgency of the climate crisis - only immediate and urgent action will allow us to avoid the worst effects of climate change.

Elsewhere the report builds on the benefits of immediate action, emphasising that action to bring down emissions will rapidly lead to improvements in air quality. In a world where 10 million die annually from issues relating to pollution, including the first recognised death in London last year, the urgency is clear. 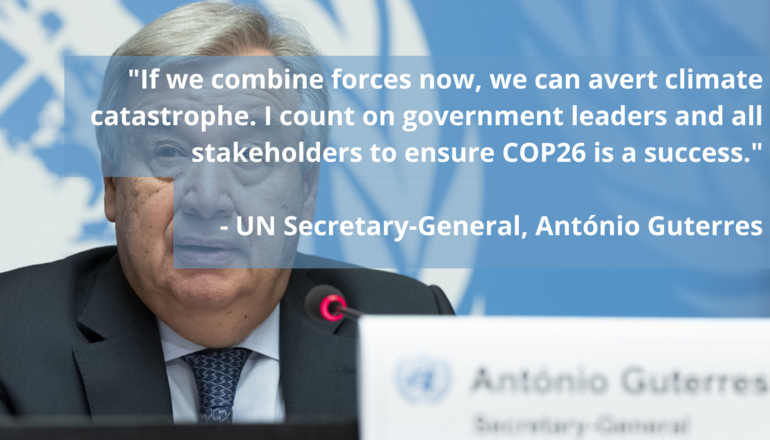 The pathway to 1.5 is open to us, and we know already that this will be a focus of COP26, November’s UN Climate Conference in Glasgow. This report will remind member states of the urgency of collective action. The UK is set to release a Net Zero Strategy in advance of COP, and the Comprehensive Spending Review will outline funding for green initiatives. Our role is to ensure that communities are at the heart of policy. Community energy projects are essential to a just transition to net zero and need to be recognised and supported.

Click here to find out more about COP26 and how to get involved!