COP26: outcome disappointing but there are opportunities for the sector

The Glasgow Pact is a disappointment. If the possibility of keeping to 1.5℃ is still alive it is ‘on life support’ as United Nations Secretary-General Antonio Guterres commented. Current Nationally Determined Contributions from countries, if fully carried out, would result in a warming of 2.4℃ by the end of the century. What is rarely pointed out is that it is likely that anything above 1.5℃ will lead to runaway climate change.

The agreement does require member states to return on a yearly basis with more ambitious commitments which is an important ramping up of urgency from the 5 yearly cycle contained in the Paris Agreement. But at the last minute wording was weakened, pledging to ‘phase down’ rather than phase out ‘unabated’ coal and phase out ‘inefficient’ fossil fuel subsidies, both of which provide loopholes you could drive a coal truck through. That this is apparently the first time a COP agreement has specifically mentioned ‘coal’ and ‘fossil fuel’ beggars belief and shows how subject to big energy interests the process is. The lobbyists from that sector at COP exceeded all the country delegates put together.

Community Energy England attended COP with a group of 10 wonderful activists, seeking to meet with decision-makers, primarily, but not exclusively, from the UK to make the point that ‘Net zero is not possible without people’ and that the government must support community energy to deliver public engagement and local solutions, 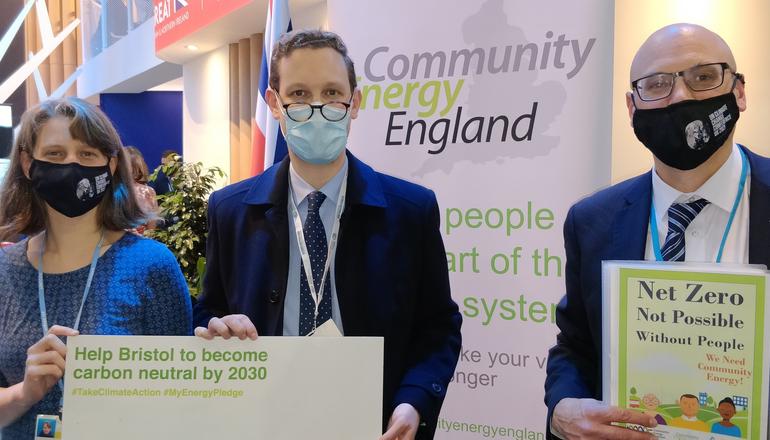 Emelia Melville and Dave Tudgey of Bristol Energy Network with Darren Jones MP, chair of the BEIS Select Committee at the UK Pavilion in the Blue Zone at COP26

We pointed out that the Net Zero Strategy, which we had been promised would contain the government’s plans for community energy, contained neither a plan nor any ‘practical support measures’ to help it to scale, as recommended by the Environmental Audit Committee. Nor did it ‘emphasise the importance of community energy’ as they also recommended.

The Committee on Climate Change is unequivocal: ‘If the people of the UK are not engaged in this challenge - the UK will not deliver net zero by 2050… people need to be brought into the decision-making process and derive a sense of ownership of the Net Zero project.” The UN shows that “around two thirds of emissions are linked to household activities”. The huge ‘emissions gap’ from people simply not being engaged in the ‘net zero project’ is barely being addressed and will cause us to fail even if we meet technology, finance and all the other pathways.

The group worked tirelessly attending dozens of events and speaking to MPs, and other potential allies. We got the promise of meetings and action from numerous people including the BEIS Secretary of State and the Energy Minister. The work of capitalising on this continues.

We are advised that some support scheme for community energy may be able to be created from BEIS’ departmental budget but that this will only happen if community energy is kept high up the Ministers priority lists by lobbying from MPs and other sources. So please write to your MP to urge them to support community energy as essential to achieving net zero and delivering multiple co-benefits.