A reinvented community energy sector could play a key role in making the net zero transition a socially just one; but it will need support from policy

This blog summarises a newly published academic paper in the journal Energy Research and Social Science, available to download for free until 5 August at
https://authors.elsevier.com/a/1dFJ%7E7tZ6ZtcoX

A reinvented community energy sector could play a key role in making the net zero transition a socially just one; but it will need support from policy.

Today, the dominant activity in UK community energy – at least in terms of what brings in money – is renewable electricity generation, at small and medium scales. But getting new projects of this sort up and running has been much harder since the closure of the Feed-in Tariff scheme two years ago.

Now obviously, community energy groups are NOT just in it for the money, and they’re not strangers to working for free! Nevertheless, spending power is, well, power. You can use it to pay staff, supporting the local economy and ensuring your organisation survives; to support other local groups; or build affordable housing. So the question arises – where will it come from in the future?  And not just next month, or next year, but in the longer term?

Here is where the current talk in energy policy circles, of the future energy system being decentralised, decarbonised, and ‘consumer’ centred, seems to offer bright prospects to community energy. So, amid the end-of-FITs gloom, we brought practitioners, policymakers and other stakeholders together to scope out a hopeful long term vision. We asked them to picture a future where community energy is thriving. What do you see community energy groups doing? How are they organised? And crucially: who needs to do what to make it happen?

The key message is that community energy could become much more than electricity generation, but could spread into all parts of the energy system. Yes they would still generate electricity – but they would sell it to local customers as well as national wholesalers, and they would trade flexible demand on behalf of local residents. They would using pricing power and technical know-how to address fuel poverty and the digital divide. Some would run ‘mixed mobility’ services – buses, car clubs and more; or heat networks in off-gas-grid areas and new-build developments. Some organisations might focus on one or two complementary activities – others might embrace many, as illustrated in our graphic. But through this technological change, the focus is always on social and environmental outcomes. 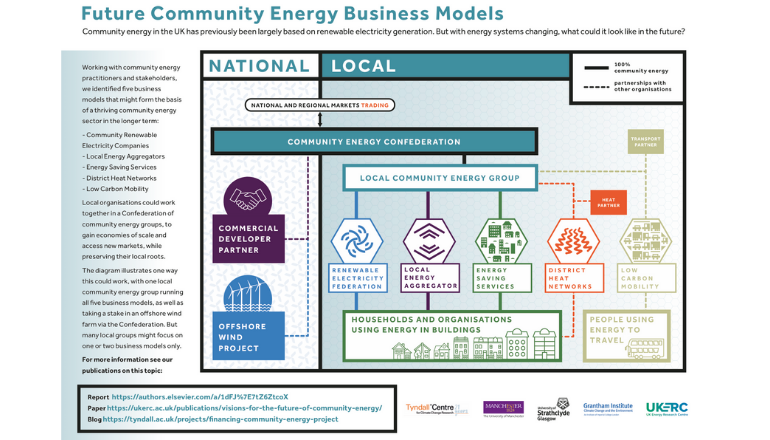 Achieving this would require change in the shape and scale of community energy – as shown in the graphic. The boundaries of the sector might become ‘fuzzy’, with partnerships with other community groups, housing bodies and local authorities more common.

We also saw potential for more partnerships with other community energy groups across multiple localities, in a member-controlled Confederation. This would be a ‘coop of coops’ style organisation, a bit like Energy4All or the emerging Big Solar Coop, but on an even larger scale. Its purpose would be to help resolve the perennial tension between achieving economies of scale, and preserving local groups’ roots in their communities. This would require a shift in thinking for the sector, perhaps. But, with E4A and others (also e.g. Communities for Renewables) paving the way, more evolution than revolution.

If this vision sounds good, the big question is: how to make it happen? Community energy activists have plenty of experience of learning new technologies and adapting to change. This, and their skills in partnership working, will be called on increasingly in the future. But there will need to be policy changes too. The list is long, but includes central government regulating to give smaller players a better chance of surviving the energy market; and governments from devolved to regional to local levels purchasing from and investing in community energy.

Yet policymakers may see the sector as inevitably small, whose role in the energy transition is more about cultural change than operational delivery. Of course, community energy has long argued that it is about ‘more than megawatts’. But our vision shows the sector with a significant operational role. How to convince the policymakers that this is desirable – and feasible?

Firstly, ideas matter; and the concept of ‘Just Transition’ could be important. Scotland launched its own Just Transition Commission last year. Wales has had a Wellbeing of Future Generations Act for some time. Some might argue that a techno-transition could be managed top-down. But surely an inclusive and just energy transition needs, not just grassroots participation, but grassroots power and ownership?

Secondly, dare we say it, policymakers could be directed to look to Europe. Several countries have large, operationally-focussed community and cooperative energy sectors. Why can’t the UK?

Finally, evidence of the benefits of community energy is important. I’m looking forward to reading the latest research on this from CAG Consultants, launched in Community Energy Fortnight – and hope this can play a part in setting us on the road to a thriving future for community energy.