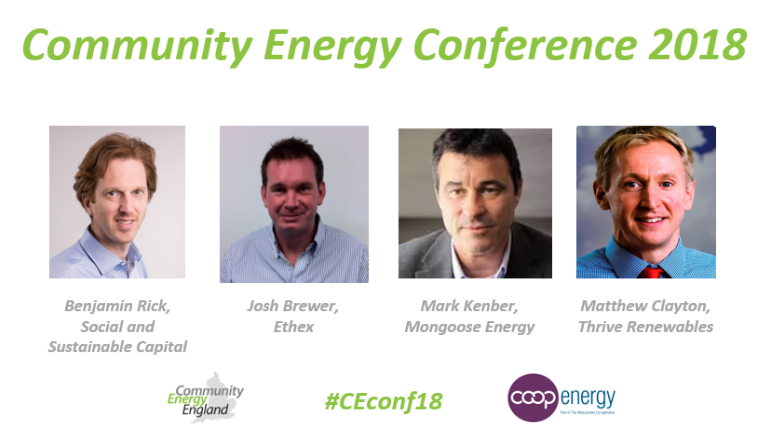 This workshop will outline the different funding and financing mechanisms available for community energy organisations, how this may change post-subsidy, the options for refinancing and the opportunities and challenges of transferring private assets into community ownership. Hear about case studies from across the sector and put your questions to experts from Ethex, Social & Sustainable Capital and Thrive Renewables.

Ben grew up in London and studied at UMIST in Manchester, graduating with a BSc 1st Class Hons degree in Management Science. He worked for eighteen years in financial markets, latterly as a Managing Director for Bank of America Merrill Lynch where he built and ran the Proprietary Trading Group in London. Ben left the City in 2012, and set up Social and Sustainable Capital which launched two funds in 2014. SASC’s mission is to enable inspiring charities and social enterprises in the UK to increase their social impact by providing them with appropriate and flexible finance. SASC has so far deployed £25m to more than twenty amazing organisations.

Josh joined Ethex as the Senior Business Development Manager in January 2017, in this role he helps social enterprises to raise the investment they need in order to deliver the good they want to do. Prior to working at Ethex, Josh was employed by the socially responsible investment research provider Vigeo Eiris, specialising in monitoring and reporting on corporate involvement in controversies relating to environmental, social and governance issues, he also led the Energy sector Research team. Josh has previously worked in the Economic Justice team of Save the Children UK and as a Project Support Manager at NatWest Bank.

Mark is an economist who has worked for over two decades on topics related to climate change and energy. Before joining Mongoose Energy in 2016, he had been at international non-profit The Climate Group since 2004 and was its CEO from 2011. As well as being a Director of Community Energy England, he sits on the board of a number of community energy groups, including Heart of England Community Energy, BHESCo and Our Community Energy.

Matthew has worked in the Thrive Renewables team (formerly Triodos Renewables) since 2006 and undertakes the overall management of Thrive Renewables Plc. In this time Matthew has contributed to 15-fold growth in the Company. Prior to joining Triodos Bank, Matthew was part of a small team which established Camco International, one of the world's leading carbon trading companies, focusing on supporting sustainable energy projects via the Kyoto framework.