The Solar Bee Project, managed by the Naturesave Trust, has been awarded the 2019 Community Energy Environmental Impact Award.

The project has so far seen ten Thermosolar Beehives installed across the UK to create the UK’s first solar bee network. The innovative new hives have been designed to use solar energy to destroy the Varroa mite that has been devastating honeybee populations across the world. 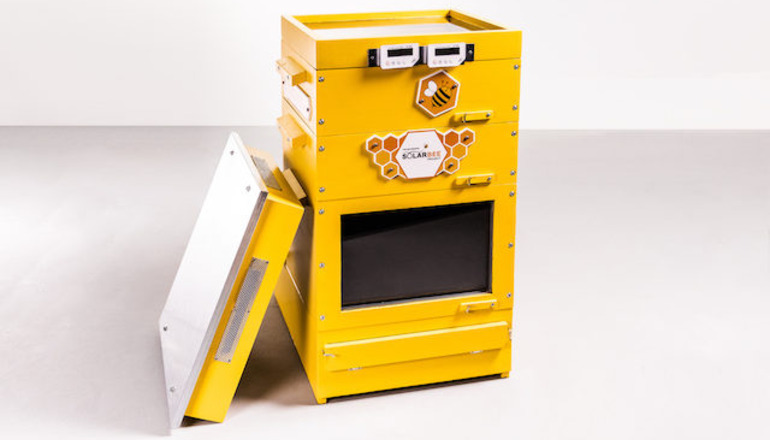 The Varrua mite is a key global threat to honeybees. Historically, chemical treatments have been used to kill the mite, but these are now failing as the Varroa develop resistance. Thermosolar beehives use heat generated by the power of the sun to destroy the Varroa without any chemical intervention. Whilst thermosolar hives have been used in individual locations around the world, this project constitutes the largest single rollout of this new beehive technology.

The first wave of hives has been installed in pairs at community owned solar farms that could demonstrate their site had the potential to support a colony of bees and they have a commitment to biodiversity at the heart of their organisation. Each participating group received guidance about how to find a suitable beekeeper and how to set up a formal agreement between the parties. The selection of the beekeepers was important, as they needed to have the correct skills as well as a commitment to the scientific and conservation elements of the project.

Training and instruction on use of the hives has been delivered, and there’s ongoing support for all of the sites from the Naturesave team. The beekeepers are all using standardised monitoring forms so data from the sites can be compared. The data collected from the project will provide great insight into the effectiveness of the hives and will be of significant value to national and international bee conservation.

The project doesn’t only focus on bees, it also promotes community solar farms; demonstrating their potential to become havens for biodiversity. With biodiversity loss recognised as equally concerning as climate change, many community energy groups see their projects as an opportunity to take practical action on both issues.  Tackling the biodiversity crisis alongside generating renewable energy should also help win over support for solar farms from the public and planners. The idea that the development of a solar farm is potentially ‘taking away’ green fields has, through projects like this, the potential to be dispelled, if the result has a more positive impact on wildlife then the farmland that preceded it.

The four current Solar Bee groups have seen great interest from their own membership and the wider local community, with talks and site visits undertaken to explain the project and introduce the beekepers. Next year the first Solar Bee honey will be produced, generating more interest and opportunity to raise awareness of the project to more people.

The Naturesave Trust, a charitable trust funded exclusively by Naturesave Insurance, usually provides one-off grants to environmental projects. The potential to link biodiversity and solar power through this new solar beehive technology, has meant that they are now determining the next steps to roll out the project to more community solar groups and develop the project on a larger scale.