This award was sponsored by Co-op Community Energy. This new venture has been created by Midcounties Co-operative and Octopus Energy in order to help support the vital community energy sector. The initial focus will be on making sure sites are receiving a fair price for the energy they export, and providing a route to market for subsidy free sites. Moving forward, the Co-op Community Energy hopes to provide further support by helping provide advice and support, create local markets and investment.

Established in 2018, NKCE has quickly developed to become a borough wide community energy co-op with over 140 local resident members, and more than a third of investors from within the borough. 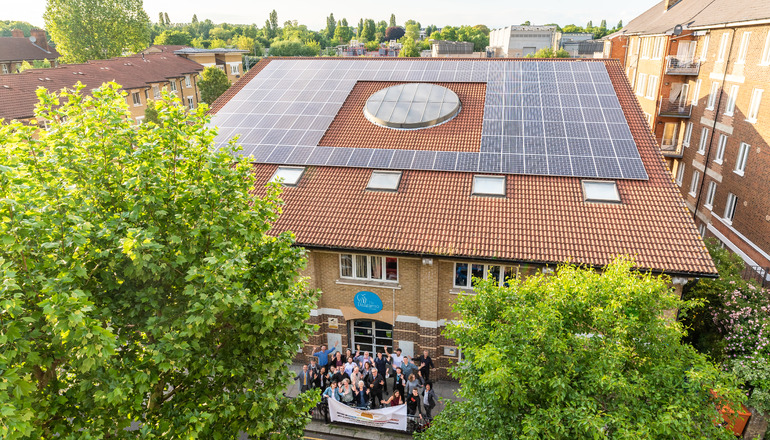 The Royal Borough of Kensington and Chelsea, London has a marked disparity of income, with the north of the borough suffering from high levels of deprivation. The Ladbroke Grove and Latimer Road areas in the north of the borough are currently coming to terms with and supporting residents following the Grenfell disaster. Understandably the majority of local services and charities are working to help those affected by the tragedy.

The borough’s active network of community organisations contained very few environmental groups before the launch of NKCE. With the backing of ‘parent-organisation’ Repowering London the NKCE co-op has built a new environmental movement in the area, with volunteers reaching out to other organisations and building links with groups including the London Cycling Campaign, Imperial College London, Migrants Organise and NOVA. 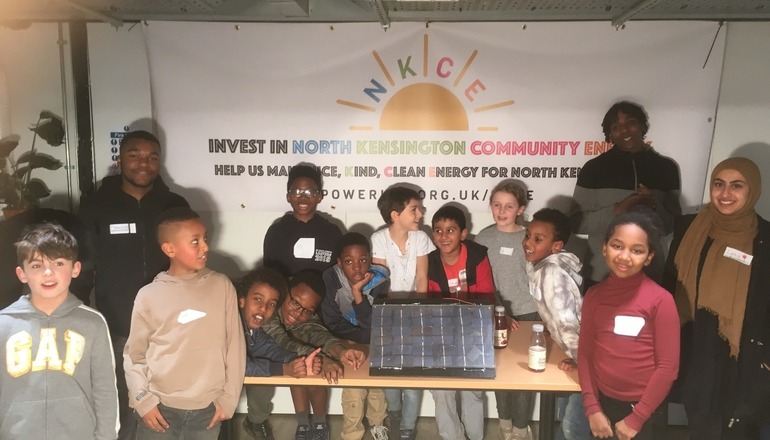 Within this context, NKCE set out in 2018 to install solar panels on schools and community buildings in the borough, and to use the profits from the sale of electricity to support and fund positive community actions. Working with the council three roofs were secured, two primary schools and a community centre. In March 2019 NKCE installed 86.27 kWp of solar generating capacity. The solar panels will save 32 tonnes of CO2 a year, offer investors an average 3% return on their investment, and are set to generate a £28,000 community fund across the life of the project, in addition to creating savings and educational opportunities for the schools.

The project has been developed with support and donations from the Westway Trust and Kensington and Chelsea Foundation charities. The Westway Trust also donated pop-up office space for six weeks giving NKCE a physical presence in the borough and sponsored two educational solar panel workshops.

Following the successful installation in March, NKCE has been working with the Westway Trust and the council to install a 150 kWp solar array on the Westway Sports Centre, phase 2 of the NKCE project. This has received FiT pre-accreditation.

Working with the council, plans for phase 3 are now in development, with a long-list that currently includes a children’s centre, more schools and a social housing estate. NKCE has started conversations with the Lancaster West Estate TRA to support the development of low carbon heating options and is working with the council to develop a scheme to create off-grid bus stops across the borough. They are also working with the Westway Trust to investigate a micro-AD system on a refurbishment scheduled for 2020.

At the heart of NKCE is a belief in the power of education and behaviour change. With the support of Repowering London they have been working closely with local schools: the NKCE logo was designed by a year 6 student following a borough-wide competition, and presentations and workshops on climate change, renewable energy and community engagement have been held at schools and Imperial College London.

Repowering ran its paid Youth Training Programme for 16-19 year olds in the borough. Sixteen young people completed the programme, including three young people who are not in education, employment or training. Three of the graduates continue to work with NKCE.

The co-op currently has 144 members with volunteers attending community events to recruit further members to ensure representation from the communities NKCE is based in. Membership for residents of the borough is just £1 to be as inclusive and democratic as possible.

Due to the deadlines imposed by the closure of the FiT scheme, phase 1 of the project had to be delivered at speed. Whilst incredibly hard work, the fast approaching deadline, meant that volunteers, council staff and politicians, and local groups all pulled together to achieve a brilliant project. These working relationships, brokered under pressure, have thrived.

NKCE has brought community owned solar energy to Kensington and Chelsea. By involving residents from the outset and engaging schools, community centres, charities and the council, NKCE is creating a people-centric route to creating a zero-carbon borough in the heart of London.