Riding Sunbeams, the start-up social enterprise on a world-leading mission to power railways with community solar, has been awarded the 2019 Community Energy Collaboration Award.

This award was sponsored by Power to Change, an organisation who want to create better places through community business. They will use their endowment to strengthen community businesses across England. This means providing money, advice and support to help local people come together to take control. At a time when many parts of the country face cuts, neglect and social problems, they want to make sure local areas survive and stay vibrant. They do so by being bold, collaborative, open and informed.

Riding Sunbeams aims to connect enough unsubsidised, community- and commuter-owned solar to the rail network in the South East of England to power one in every ten trains, and importantly share learning from the project to encourage more solar to be used for the benefit of the railway routes, the communities that host them and of course the planet.

At its core, the idea is pretty simple. Solar farms should be installed next to the train tracks - on train sheds, nearby fields and industrial buildings. These would not connect to the grid as a usual solar array might. Instead they’d power the railway directly to provide traction power for the trains.

Creating a project to test the idea is how Riding Sunbeams was created. The idea, originally conceived by Repower Balcombe, was brought to life as climate charity 10:10 connected experts from the Energy Futures Lab at Imperial College London with members of Community Energy South and electrical engineering specialists Turbo Power Systems. 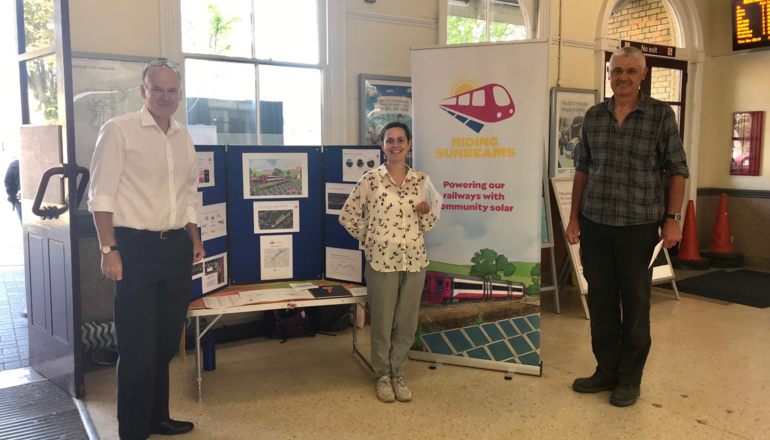 After extensive technical work the research team discovered that yes, solar PV can be installed by the railway line and connected directly to electrified track to provide traction power for trains. You can bypass the grid completely.

The research found that solar traction power could provide around one tenth of the energy needed to power trains on the UK’s dc electrified routes every year. It also makes financial sense for solar farms and rail operators, with no need for public subsidy support. With both the technology and the finances aligned, it’s clear that there’s huge potential to make this happen in the UK, and around the world.

The project has since been honing the technology with Network Rail to make it as safe and efficient as possible. They’ve also been working with community energy groups to conduct feasibility studies on six potential community solar sites in the south east of England.

In August 2019 the world’s first solar PV system that connects directly to the railways traction system was launched. The project has been awarded funding by the Department of Transport and Innovate UK to undertake this ‘first of a kind’ work. The project is now also working with EST Wales and Network Rail Wales on the Green Valley Lines Project supported by RSSB – Rail Standards and Safety Board. 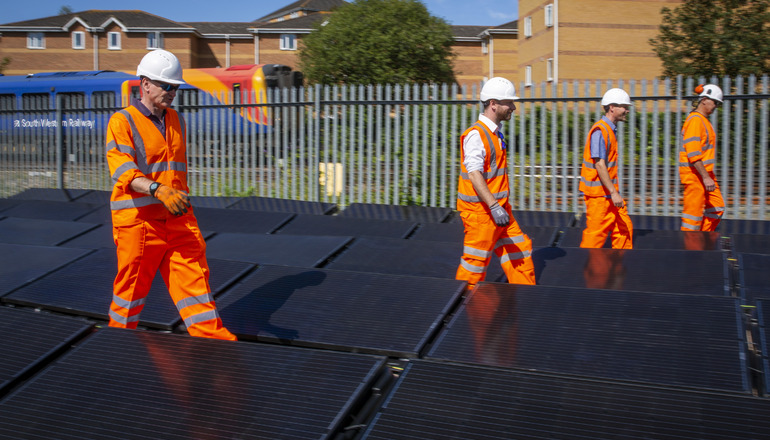 Riding Sunbeams is helping the UK’s largest energy user to decarbonise and use renewable energy.  The core team has embedded community energy, social impact and the importance of working with lineside communities and rail users at the heart of the project.

The benefits of community energy funds feature as a key impact of the project, as well as investing in energy efficiency, clean air, sustainable travel and connectivity, and local community initiatives.

The core project team has been supported and funded by a whole host of organisations and individuals. Riding Sunbeams continues to develop the project, with community energy groups core to its mission.

Plus additional organisations including: