Selce is a community energy group that places as much emphasis on supporting people to be more energy efficient and tackling fuel poverty as they do on generating renewable energy. They use social business models to meet the needs of people in their area across the wealth gradient.

Since their inception in 2014 Selce has provided one-to-one advice to 2,738 people that has benefitted approximately 6,845 householders; trained more than 700 front line staff in fuel poverty awareness; made energy efficiency improvements to 128 homes, benefitting 376 residents; supported and trained 48 volunteers; and installed solar PV on seven schools, with an additional six sites in the pipeline. 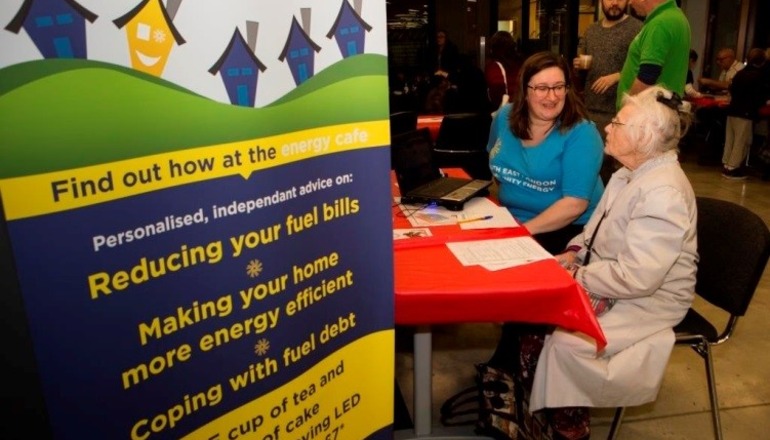 Selce work in collaboration with other local organistations to make sure they reach the most vulnerable residents and offer support where it’s most needed, as well as creating their own social enterprise, Future Fit Homes, to work with those who are able to pay for energy efficiency measures.

Fuel poverty alleviation has been core to Selce’s work, helping people to stay warm and well in their homes. The Selce Energy Café is a drop-in energy advice service that is incentivised and de-stigmatised with tea and cake. Last winter Selce energy advisors worked with 280 vulnerable residents to identify savings through energy market engagement, access to water or energy discounts, debt write-off, behavioural advice and support in accessing grants.

The Selce team also attend community events aimed at those who are at risk of fuel poverty. Last winter Selce ran 35 workshops at such events that were attended by 479 people and provided one-to-one advice to 145 clients following these workshops.

The summed reduction in energy costs for those that had one-to-one advice was at least £142,163.59 over three years. Current estimates show that the Social Value of this work to be at the very least £3,000,000.

Selce also train individuals who work with those at risk of fuel poverty. Selce has delivered 20 Front Line workshops that have seen 213 front line workers trained to understand the causes, impacts and interventions into fuel poverty.

With much work around fuel poverty aimed at older residents, Selce also provides support for vulnerable families. They accessed families at risk by recruiting and training a team of parents to lead the Parent Power project and supported staff at Children’s Centres to help identify those most in need of help.

Whilst their Empowering Elders project helps tackle fuel poverty amongst older people in Lewisham by using the intelligence that exists in trusted community organisations. It brings six community partners together to recruit and train a team of older people to be ‘energy champions’. The champion’s team then provide tailored advice and home visits for their peers.

Selce are equally proud of the work they do to promote energy efficiency in South East London. Their ECO Project enables residents living in fuel poverty to access funds for home energy improvements. Every time measures are installed in a household identified by Selce using either Warmer Homes or ECO funds, Selce gets a £100 referral fee. The goal is for the project to become a self-sustaining social business model. To date 128 households have benefitted and there is a pipeline of a further 85 households awaiting measures. Selce has calculated that the measures installed so far will save clients £217,750. The Social Value of these measures is £105,959 according to the HACT social value calculator.

Whilst the new Future Fit Homes service enables the Selce team to share their knowledge on domestic energy efficiency with householders who are able to pay for energy efficiency measures. A team of eight trained advisors are currently doing outreach and providing tailored advice to support those wanting to retrofit their homes.

Selce also owns solar schemes powering seven local schools, with six new sites in the pipeline. Since 2016 these installations have saved the schools involved £23,386 whilst abating almost 200 tonnes of CO2. Meanwhile £42,667 has been paid to shareholders in dividends, and over £6000 of these dividends has been donated to the Selce fuel poverty fund.

Selce has continually innovated to meet need and work towards their vision of a fairer, cleaner, energy system.  They are committed to continual reflection and improvement: their work on impact assessment is one example of this and it will provide a rich source of information to allow them to do even more in the future.