Meet the judges for the 2018 Community Energy Awards: 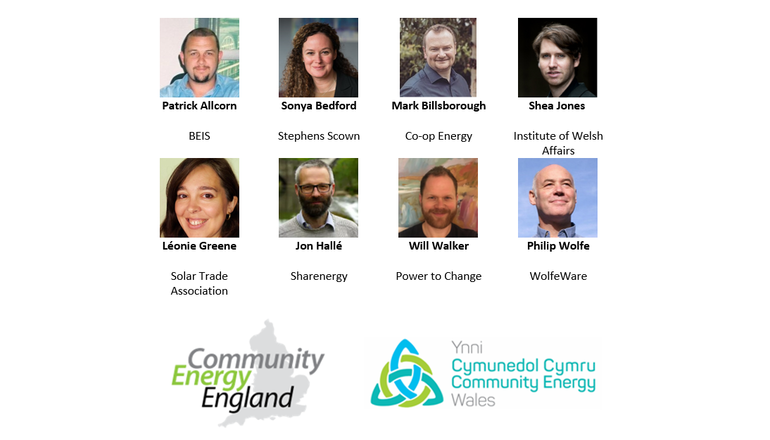 Patrick is the head of the local energy team at BEIS which was created to help DECC support and develop energy solutions at a local level. From the community through local authority to the Local Enterprise partnerships - sharing best practice supporting strategic and project development and delivery. Previously Patrick has been responsible for the design and implementation of the Domestic RHI. He joined that team in early 2012. Prior to this appointment, he was responsible for community energy in DECC. He set up the LEAF project that enabled over 200 communities to set up local energy schemes in 2012. Before joining DECC, Patrick worked for Transport for London and the London Borough of Croydon as well as time working as a journalist and a sustainability consultant.

Sonya is a Partner with Stephens Scown solicitors and is head of the firm’s Renewable Energy team. Her strengths lie in dealing with wind farms, wind turbine acquisition, solar pv, anaerobic digestion, biomass and hydro. Sonya is also experienced in dealing with grid connection agreements, issues arising with Ofgem accreditation and funding of renewable energy projects. Sonya assists with many community energy projects and is involved in Regen, Exeter Community Energy, Somerset Renewable Energy Community and the Sustainable Institute. She has also been recently awarded an MBE in the Queen's Birthday Honours. Sonya was crowned the 2017 Community Energy Champion.

Mark has worked in the energy industry for almost 20 years, with a particular focus on Renewables and Commodity Trading / Financial Risk Management. He headed up the investment team of E.ON's European onshore wind project, in which Eur5 billion was invested in onshore and offshore wind globally. He also managed all of the Commodity Risk for those 4GW of assets in each country.Mark is also a CEE board member.

As Re-Energising Wales project officer at the Institute of Welsh Affairs, Shea manages and co-ordinates the IWA’s energy project which plans to deliver a practical blueprint for Wales which aims to boost the Welsh economy through a detailed programme of energy saving and generation to exploit Wales’ renewable energy resources.

Léonie leads on media, stakeholder engagement and policy lobbying for the Solar Trade Association. Léonie was previously Head of External Affairs at the Renewable Energy Association between 2007 and 2013. Before that she was Political Adviser at Greenpeace, initiating their Decentralised Energy campaign. She also worked for the Deputy Mayor of London on Sustainable Development and the conception of the London Climate Change Agency. She holds a Masters in Environmental Change with a focus on both the social and physical aspects.

Jon is the co-founder of renewable energy co-operative Sharenergy. In this role, he has a wide remit from detailed support of individual projects to a nationwide strategic involvement with public, private and third sector bodies. Before Sharenergy Jon had a varied career as an IT consultant, Chief Technology Officer, Director of a co-operative creating biodiesel from waste oil in Oxfordshire and Project Lead at Energy4All. Jon was crowned the 2015 Community Energy Champion.

Will joined Power to Change in March 2018 and leads on their work on community energy. He has ten years’ experience in the sustainable energy field, working in a range of policy and programme management roles, most recently as a senior policy advisor on local energy to the UK government. There, he played a key role in the development and delivery of the UK’s first Community Energy Strategy. He holds a Masters in Environmental Strategy with a focus on the social impact of community energy. Will also serves as a Director of a London-based community energy project.

Philip Wolfe MA FRSA FEI has over 30 years experience and an international reputation in the renewable energy industry. He has worked in the solar industry since the mid-70s and established WolfeWare in 2003. He has been involved in its wide range of activities, serving on the Boards of European and British industry associations, and on bodies advising ministers, the European Commission and the British Government. Notably, Philip has recently been working on the nation's first subsidy-free industrial solar installation in Buckinghamshire.