Energy4All is a “family” of 24 independent but like-minded community energy organisations.  It is a non-profit distributing social enterprise, dedicated to delivering more community-owned renewable energy. Each Energy4All member is independent but cooperates and pays fees through Energy4All for administration and management of its energy generators in accordance with their means. The surplus generated from this work, and from separate fees charged for successful delivery of projects, meets the cost of Energy4All’s development work, enabling it to develop more community energy projects on behalf of new and existing members. Founded by Baywind in 2002, the UK’s pioneering community-owned wind farm, Energy4All has successfully enabled individuals to do something practical about climate change and to create and own some ‘green’ generating capacity. 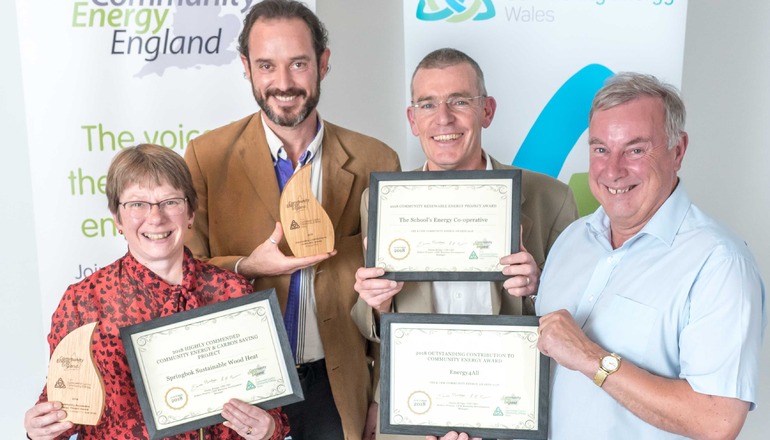 Members’ projects include many of the largest and most complex community energy projects in Britain. Projects include hydro, rooftop and ground mount solar, renewable heat and wholly owned and shared ownership of wind farms, and are located in England, Scotland and Northern Ireland. Projects are managed on sound commercial principles but adopt and deliver co-operative values and operate with the interests of the community at the heart of the project.

Operating renewable energy is complex and requires full-time availability of many skills but not the full-time presence of those skills. This complex requirement can best be delivered by sharing the skills required with like-minded organisations. This also deals with succession issues amongst volunteers. Energy4All members also co-operate on matters such as selling electricity, procurement and board member development. Members offer each other mutual support.

Energy4All members share a unique ethos: each organisation was supported in their development by the existing members of Energy4All, so they became a successful project. They all share a mission, so once they are operating, they contribute to the development of new community-owned projects. Each Energy4All member contributes to this shared mission according to their means and individual circumstances. Energy4All works with several hundred volunteers and its members have over 13,000 individual members.

By sharing the cost and risks of new development, Energy4All members enable more projects to be developed and delivered than most community groups could do on their own.

Members meet annually at the Energy4All conference to guide the work and priorities of Energy4All and to share expertise and experience and undertake training. Members frequently support new projects financially, enabling their more rapid and flexible development.

Energy4All regularly shares its models and ideas with others and explores innovative projects, to encourage replicability. The core Energy4All model of community energy organisations cooperating together to improve performance and to deliver more projects is very replicable and has been replicated both in the UK and in Europe.